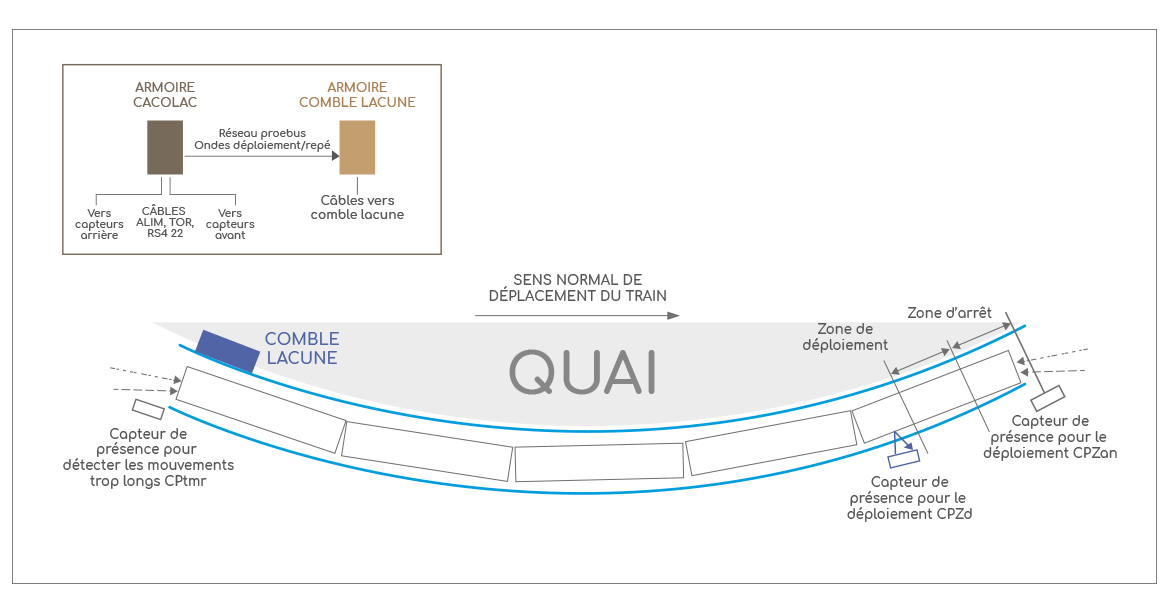 CACOLAC is a device designed to enable persons with reduced mobility (PRM) to embark and disembark from the train with complete peace of mind.

CACOLAC is a device designed to enable persons with reduced mobility (PRM) to embark and disembark from the train with complete peace of mind. In order to do this, it controls the roll-out and the stowage of a platform (the gap filler).

This platform is guided by 7 laser, infra-red and radar sensors, which measure in particular the distance between the train and the platform. This redundance of information makes it possible to reach a SIL3 safety level and to position the platform judiciously and precisely.

In 2006, CLEARSY implemented the command control system (Coppilot) of the prototype landing doors temporarily installed in the Saint-Lazare and Invalides stations. This system was external to the train and could recognize, from a safety perspective, whether a train was stopped in a station and command the opening of the landing doors. The principles and a few material components of this system were used to create the SIL3 CaCoLac safety system.

CACOLAC is the system that controls the folding and unfolding of the mobile portion of the gap filler.

The gap filler is a sliding platform (a type of footboard installed on the platform) that fills the space between the platform and the subway train when certain stations are not rectilinear.

This system is in the process of being installed at Place d’Italie, a station on Line 5 of the Paris subway system, for experimentation purposes at the location of a curve in the station causing a large and dangerous gap between the subway train and the platform. Up until now, access to the door to the rear of the train has been condemned from the platform via a fixed panel. The gap filler system will allow access to the train via this door.

The system is totally automated and does not therefore call upon human and/or manual intervention. Furthermore, it is external to the train.

Each gap filler is equipped with a mobile portion that folds and unfolds to facilitate the entry and exit of users by filling the space that appears between the platform and the subway train.

The filler is 2.5 m long and can fill an empty space of approximately 40 cm. The gap filler autonomously adjusts to the distance to be filled.

The objective of CACOLAC is to automatically control the folding and unfolding of the gap filler. Its operations are based on the observation of the behavior of each subway train through sensors located on each platform. They are composed of 2 distance indicators (laser and hyper frequency), 3 presence sensing devices (triangular infrared) and 2 speed radars (with the Doppler effect).

These sensors can detect:

An automaton manages the information provided by the various sensors and, in accordance with the scenario, commands the folding or unfolding of the gap filler and its mobile parts.

Cacolac’s safety is based on the redundancy of the sensors, the characteristic sequences of train arrivals and departures, an SIL3 automaton and the development of software with the formal B Method.

Bigorre Ingénierie designed the gap filler system for the RATP and has subcontracted the realization of the CaCoLac safety system and the related safety demonstration to CLEARSY.

Thematics
Link to this offer