Microkernels have been developed to minimize the size of software that needs to run in privileged CPU-Mode. They provide only a set of general hardware abstractions, which then can be used to implement an operating system with a high level of reliability and security on top. L4 is a second generation microkernel based on the principles of minimalism, flexibility and efficiency. Its small size (about 15,000 lines of C++) and its relevance for security make it a good candidate for formal analysis. This paper describes our approach to develop a formal model of the API of the L4 microkernel.  The goal was to evaluate the possibility to model such software with formal techniques, moreover, the objectives were:

> to describe precisely the mechanisms of L4,
> to obtain a more extensive documentation of the microkernel,
> to highlight the points where the specification was incomplete,
> to prove some static properties on the kernel.

The formalism used to model the system is the Event B formalism. Event B allows to describe a system through a set of data with properties and the events modifying that data: an event either describes an internal behavior of the system or how the system reacts to external actions. Finally, B provides automatic and interactive tools to help proving formally that each event always respects the properties.

WE HAVE OBTAINED A MODEL DESCRIBING ALL THE SYSTEM CALLS AND A MANUAL OUTLINING :
> the structure and the properties of the system abstractions
> and for eachpossible action its prerequisites as well as the modifications carried out by this action. 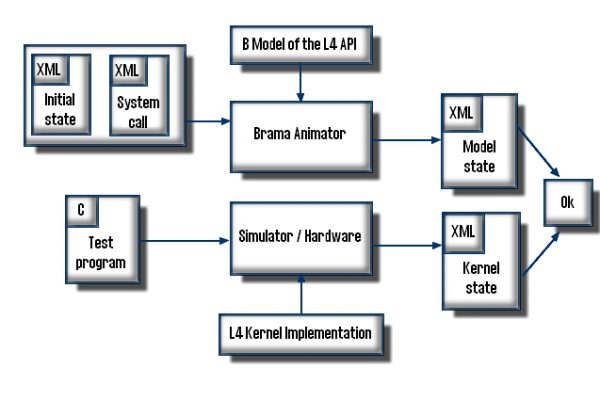 To conclude, we consider that the development of this model allows us to obtain more confidence in the correctness of the API, to describe its behavior from a different point of view and to establish a deeper understanding on how it works. The test framework allows to validate the model against an implementation; the relation between the model and the implementation is not proven (as it could be in a complete formal development with code generation) but the test allows to ensure more confidence.