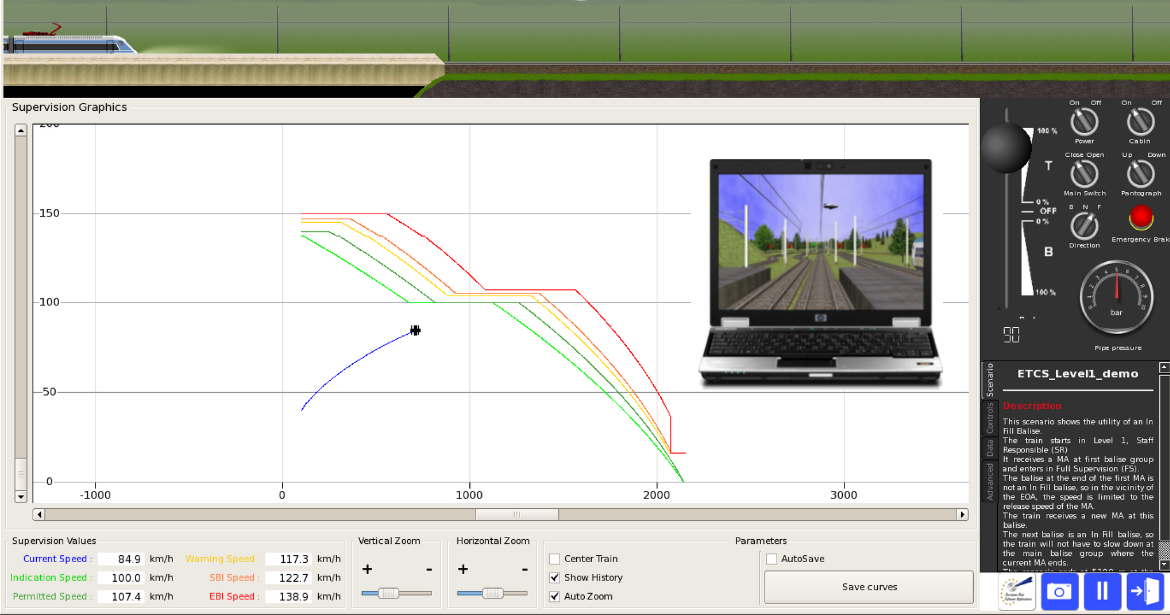 CLEARSY is launching a new version of its operational train driving simulator on tracks equipped with the European Rail Traffic Management System (ERTMS/ETCS) and is announcing the integration of the automatic driving function into its system in the near future. However, this simulator already stands out on the market for its precision, ergonomics and advanced functions.

Lightweight (it fits on a laptop on which it is delivered with user training) but very powerful, Opsimu includes a suite of tools developed by CLEARSY, including a new version of the scenario analyser which adds precision and ergonomics to the visualisation of the state of the train at each moment of the scenario. Patrick Deutsch leads the activities related to the European Rail Traffic Management System (ERTMS) at CLEARSY: Our scenario analyser allows the visualisation of braking curves, the position of the train on the topology, all the elements occurring during the driving, in particular the events recorded by the ETCS (European Train Control System), in full compliance with the standard. From predefined scenarios containing all the events likely to be transmitted to the simulated train (in particular the ETCS messages), the user drives in real time (see screen shot).

There are many applications: studies based on operational scenarios, tests of ETCS level 1 balise telegrams, and for level 2 – based on radio transmission – Radio Block Centre (RBC) and Radio Infill Unit (RIU) tests. More generally, Opsimu can be used in any R&D project requiring accurate on-board ETCS simulation. Developed to cover all situations, Opsimu will not deviate from the standard even in degraded driving situations. There is no simplification or imprecision in our system,” adds Patrick Deutsch, “but an ability to experiment the intricacies and subtleties of the specifications, whatever they may be, with access to a very large number of parameters. The direct advantage is that Opsimu is perfectly suited to engineers, whose training can be accelerated. Access to a very large number of parameters enables them to learn the operation of the ERTMS/ETCS system very quickly, and to be quickly operational.

Opsimu is currently available in three versions: Baseline 2, Baseline 3 MR1 and Baseline 3 R2. For each of them, options are available. For example, the Specific Transmission Module (STM) allows the European standard to be interfaced with national signalling systems – a strong market demand. The 3D visualisation option completes the ergonomics of the course by projecting the track image in a very realistic way. This option is particularly useful when training train drivers. An even more powerful version of Opsimu has been developed, with a high degree of automation, involving all the tools in the software suite: importing all the data, running it in fast motion and analysing the results automatically. It saves considerable time and reduces human errors. It is the result of strong interaction between CLEARSY and its customers, which often leads us to customise our simulators to adapt them to the context,” emphasises Patrick Deutsch. The next step is the implementation of the ATO (Automatic Train Operation) driving function, for which work has already begun in CLEARSY’s Strasbourg laboratories. CLEARSY is thus one step ahead of the introduction into the ERTMS system of a standardised automatic train operation function, which is one of the challenges facing the signalling sector in the context of the ‘Game Changers’.