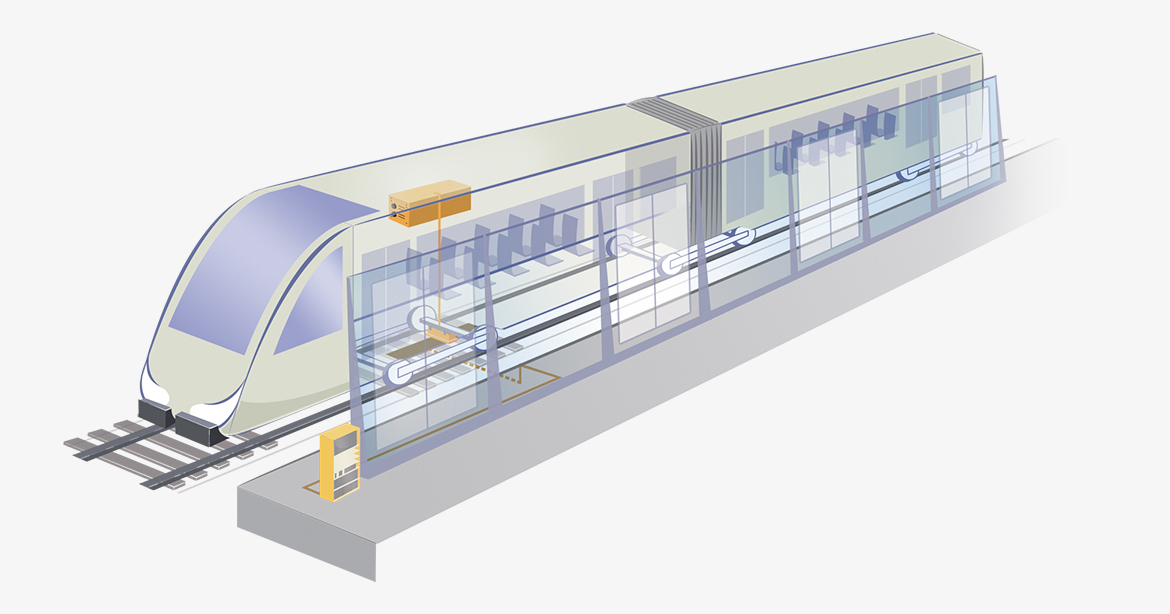 In the context of the “Paris Subway Line 1 Automation” project, the SIL3 DOF safety system, which is independent from the automatic train system, commanded the opening and closing of the landing doors installed on all the line’s platform screen doors.

It is now up to line 4 to be equipped with the DOF system, while the shuttles are being integrated on the line.

This system is used with existing MP89 trains and will be compatible with the new automatic MP05 trains that will progressively replace the current ones.

DOF also prevents the train doors on the opposite side of the platform from opening. DOF will then be disassembled when all the automatic trains will be operation on Line 4.

The DOF system includes an embedded portion on the train that processes the train door opening and closing commands made by the conductor and sends the command to the portion located in the platform’s technical office. The command to open the door is processed and sent to the landing doors.

This system is SIL 4 Level safe to enable the correct side door of the train. The platform screen doors can only be opened when the train has reached the platform with a SIL3 safety level. The solution is based on Siemens SIL3 automatons.

CLEARSY is in charge of the project and responsible for the study and manufacturing of equipment series installed throughout the line.

CLEARSY adopted an original method to answer to the call to tender: a B model of the specifications was performed with the Atelier B tool, then graphically animated. We were therefore able to define the needs of the RATP by transcribing our understanding of the system into a model and then validating this understanding by animating the system in various scenarios viewed on the screen. Questions could therefore be asked and a detailed response provided, as the system must be designed in only six months.

Like the Coppilot system, CLEARSY uses a development process that integrates the B method, from the system specifications up to the code stage.

The B models developed participate in demonstrating the system’s safety and the level of availability of the system that must be very high in order to ensure fluid traffic.

Details of the Various Constituents of the Dof1 system

The diagram above portrays the installation of the DOF system. It comprises 2 parts:

The first is installed in a technical zone close to the platform and is equipped with landing doors. It is called ground DOF and ground DOF Loop antenna.

The second part is installed at the front and the rear of the train interior. This second part is called onboard DOF and onboard DOF Loop antenna. Communication between the train and the ground is made using a magnetic loop connection, provided by an Loop antenna comprising two pieces of equipment referred to in the plan as onboard DOF loop antenna and ground DOF loop antenna. Communication between the ground DOF(at the platform) and the DOF onboard the train is only possible when the “onboard loop antenna” equipment is aligned above the “ground loop antenna” equipment, that’s to say when the train is correctly positioned in the station. The use of a magnetic loop guarantees that there is no interference with communications between the ground and a train which isn’t alongside the platform. The side and ground systems communicate with each other by using a secure series protocol. The side and ground modems modulate and demodulate the digital signal in a current loop.

In this way, the DOF system comprises:

A ground DOF cabinet placed in a technical zone on each platform. It receives the opening and closing instructions emitted by the conductor and transmits them to the side of the platform. These instructions can also be received from the SAET (an automatic system, which is active when trains are on automatic pilot), and can be transmitted to the sides as well.

Two “onboard DOF loop antenna” equipment parts at the front and rear of the train situated on the train’s bogies. These are connected to the onboard DOF and ensure communication with the ground equipment.

Two onboard DOF situated inside the train, which enable the conductor’s instructions to be relayed as well as the reception of data from the ground DOF, thus ensuring the coherence of the safety instructions. The onboard DOF loop antenna must be installed at the rear and the front of the train, which is operational in both directions (a train at the end of the line goes back in the opposite direction, the rear of the train becoming the front and the conductor changing cab). For ‘standard’ stations equipped with two platforms and for which the opening of the train doors is performed to the right, a single ground DOF Loop antenna is installed at the front of the platform. Two loop antenna are needed for stations where both the opening of the doors and the platform are situated on the left hand side.